In 1971, three white Americans opened the Muckamuck restaurant in Vancouver, advertising Northwest Coast First Nations cuisine.[1] The owners hired mainly Indigenous staff.[2] From 1971 to 1978, many workers expressed grievances about inconsistent scheduling practices, fines, and the unfair firing of employees who advocated for better working conditions.[3] After the Muckamuck workers reported these issues to the Labor Standards Branch, they were told that union affiliation was required to assert their complaints.[4] In 1978, many staff members voted to join the Service, Office and Retail Worker’s Union of Canada (SORWUC), a feminist labor union that allied predominantly women workers in industries that were not organized by the major trade unions.[5] Indigenous women workers were at the forefront of this initiative and turned to SORWUC because of the union’s attention to the overlapping issues of gender and race within labor disputes.[6]On May 28, 1978, the unionized Muckamuck workers voted to strike.[7] The strike lasted for over five years, making it the longest in the history of British Columbia.[8] The Muckamuck restaurant closed in 1980.[9] In March of 1983 the Labor Relations Board ruled that the owners of the Muckamuck restaurant owed the strikers $10,000. This was never paid since the owners returned to the US with no remaining assets in Canada.[1]

[7] Indigenous women were the main organizers and leaders of the Muckamuck Strike and were impacted the most by the discrimination and illegal practices of the Muckamuck owners and management, given the fact that women have historically accounted for the majority of service sector positions, especially hosting and serving. Julia Smith, “An ‘Entirely Different’ Kind of Union: The Service, Office and Retail Workers’ Union of Canada (SORWUC), 1972–1986,” Labor/ Le Travail 73 (Spring 2014): 42, 55. 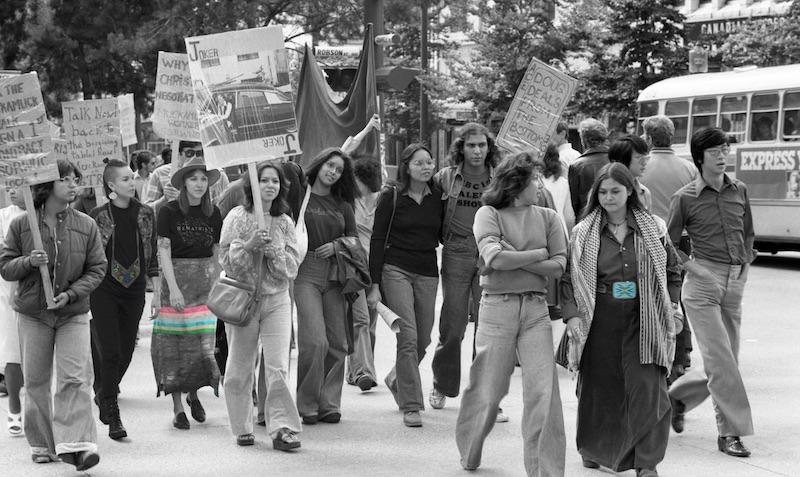 Fig. 2. Dana Claxton in collaboration with Sean Griffin, Muckamuck Strike Then and Now, 2018. Photographic mural. Courtesy of the artists.

At the Women’s Caucus for Art Panel held at the 2022 College Art Association Annual Meeting, I discussed a series of artworks that engage with the Muckamuck Strike to explore connections among moments in labor justice, feminist, and Indigenous sovereignty activist histories.  Displayed at the Morris and Hellen Belkin Art Gallery as part of the 2018 exhibition Beginning with the Seventies: Collective Acts, artworks by Hunkpapa Lakota artist Dana Claxton, Vuntut Gwitchin artist Jeneen Frei Njootli and the Indigenous women’s activist group The ReMatriate Collective used the archives of the Muckamuck Strike to consider the complex and generative relationship between past and present activist initiatives. The artists established cross-temporal dialogues through creative engagements of archival materials, envisioning solidarity and collectivity among moments of feminist and Indigenous sovereignty activist activity across time.

cross-temporal dialogues through creative engagements of archival materials, envisioning solidarity and collectivity among moments of feminist and Indigenous sovereignty activist activity across time.

Inspired by a 1999 article titled “Muckamuck: A Strike for Indian Self-Determination,” the ReMatriate Collective created the banner YOURS FOR INDIGENOUS SOVEREIGNTY, (Fig. 1) that hung on the façade of the gallery during the exhibition, accompanied by a black banner concealing the name of the gallery. The ReMatriate Collective was founded in 2014 by Vuntut Gwitchin artist Jeneen Frei Njootli and Taltan architect Kelly Edzerza-Bapty, who developed the organization to connect and empower Indigenous women and Two-Spirit people through social media activism.[1]  Their work communicates the shifting, yet enduring materialization of Indigenous sovereignty from the 1970s to the present day.[2] The banner draws from the language of archival materials the forms of communication that expressed the Muckamuck Strike’s political framework in its historical moment. Picket signs, leaflets, banners and newspaper coverage of the strike mobilized the activists’ struggle for justice and communicated their aims to the public. Bringing together the language of the newspaper article and the public-facing nature of protest materials, the banner reorients public space through its re-presentation of the rhetoric defining and propelling the politics of the Muckamuck Strike. The public statement and its reference point emphasize the significance of historical Indigenous political organizing to contemporary Indigenous sovereignty activism.[3] By revisiting the newspaper article, the collective declares an enduring connection among these initiatives and continued relevance of the strike’s politics.

In the monumental photomural Muckamuck Strike Then and Now (Fig. 2), Dana Claxton inserts members of the ReMatriate Collective into an archival photograph from a newspaper article depicting protesters marching at a Muckamuck Strike picket action in 1978. Claxton’s addition of the ReMatriate Collective members to the group establishes a visualization of cross-temporal solidarity, inviting the viewer to consider the ways that gender justice and Indigenous sovereignty coalesce in diverse practices across time while emphasizing their relationship. The imagined collective of Muckamuck strikers and ReMatriate Collective members troubles conceptualizations of time as a linear phenomenon with distinct delineations of “the past” and “the present,” rather asserting the entanglements of historical activist thought and practice to contemporary social justice organizing. Claxton’s photomural shared the gallery space with The Sew In (Fig. 3 and 4).

This collaborative installation by Claxton and Frei Njootli consisted of an assembly of overturned tables, sewing machines covered in grey fabric cases, and chairs draped with colorful sheepskins. These materials were used during two public workshops— Ribbon Skirt Making and Ribbonizing a Shirt— held by Lakota Woodmountain artist and educator Kim Soo Goodtrack (Fig. 5).[1] The ribbons on a ReMatriate Collective member’s skirt are rendered in color in Claxton’s photomural and ribbons hang from the edges of the ReMatriate Collective’s banner, establishing a dialogue with the installation. This visual connection links ribbon garments and the process of their creation to other forms of activist practices centered on gender justice and Indigenous sovereignty.

The artists’ engagements with the Muckamuck Strike establishes ground to relate historical and contemporary activist strategies and initiatives in terms that emphasize continuation and exchange across moments of social justice organizing. Through these imagined connections, the artists draw attention to Indigenous women’s leadership in activist activity across time, subvert the erasure of these histories from narratives of social justice organizing, and envision cross-temporal solidarity and relationality among people dedicated to Indigenous sovereignty and gender justice activism.

Barker, Joanne. “For Whom Sovereignty Matters.” In Sovereignty Matters: Locations of Contestation and Possibility in Indigenous Struggles for Self-Determination. Edited by Joanne Barker. Lincoln, NB: University of Nebraska Press, 2006. 1-32.

Friend or Foe? Access, Art and the Perfunctory Nature of Artificial Intelligence on Creative Process

Friend or Foe? Access, Art and the Perfunctory Nature
of Artificial Intelligence on Creative Process

Featured Image : AI-Generated Portrait of Me from Lensa, 2022

Last year marked the 50th anniversary for the National Women’s Caucus for Art and we’ve only just begun to celebrate the women on the frontlines of change. When I was told that I would become the new editor for WCA’s blog ArtInsights, I was honored.  I knew I needed to do something special. I am very interested in our world, and I want us to share in this journey together. I’d like to consider my blog posts  “Works In Progress” because similarly to our work, we are in progress. We are evolving and we won’t stop until the end.

In the early 2000s, I wanted to see the exact moment we are living in now come to fruition. I wanted to see access to information, art become democratized, and the ideas surrounding race, capitalism, and economics become demystified. But most of all, I wanted to come to the table as a woman whose intellect was not a threat but an asset. For me, that is what I saw with women artists and women in the art world. They were sensual, beautiful, cultured, brilliant, and strong. More importantly, they were on a mission, and it appealed to me. If it sounds like something that resonates with you, you are in the right place.

I became a member of the organization because I want to be next to artists, writers, activists, and historians committed to changing society. I want to be part of a global community that could see me where I could show up fully as myself. So, I decided to not only join, but to get involved with the art writer’s committee. During my first meeting with the committee, I sat among women who’d made artistic, pedagogical, and cultural decisions surrounding art. Although I was not as highly decorated as many of these women, I not only felt I could learn but that I was among my peers. Because of a natural kinship, I feel among women of all nationalities and diverse backgrounds, I know this is  the place for me. The ArtInsights blog began as a platform that centered conversations with artists. I want this space to be a  launching pad for  ideas and thoughtful, intellectual discourse that pulls on perspectives from all walks of life.   This space should not be seen as charity or a good deed, but as a cipher of education that inspires our overall mission—amplifying women’s voices and work. I’m excited.

What I’ve noticed more than anything over these last few years since the pandemic — is a visible shift in cultural paradigms and power struggles, and this year is no different. In fact, 2023 is an important one for our democracy. We had a loss with Roe v. Wade, but there are still more stories to tell in that area. However, we had a big win with the Respect for Marriage Act, which federally legitimized all unions. This month’s theme for our blog is Art and Technology. In this moment when we are looking, we should be looking to the future.  Visual culture’s iconography speaks to the subconscious. Whether it’s Barbara Kruger’s iconic slogans, Faith Ringgold’s revealing paintings on race, or Linda Vallejo’s spiritual work and symbolism—women artists have a keen way of viewing the world by making magic from the ordinary.

So, where do you see the direction of art going? For me, I am an abstract painter, writer and sewist. The melding of color and text will always be it for me.

Oscar Wilde once wrote, “life imitates art far more than art imitates life” However, I feel that in this season of our lives, artists are no longer simply reflecting on the times, but are using technology to drive the times and reimagine societal narratives. The idea of co-creating with tech signals a strong desire for artists to maintain control of their messages as well as their networks. This is extremely meaningful for women artists as a whole who’ve yet to achieve parity in the male-dominated art world. Artists are working with technology and opening themselves up to a wellspring of opportunity that we still have yet to see.

Whether artificial intelligence is found within environmental art, comingled with blockchain technologies, AI-assisted drawings, or helping academics increase their scholarly productivity, tech is here to stay.

Over this next month I want to share insights into technology, discover artists that are using tech to affect change, and learn  how we could possibly use its innovations. I don’t know about you, but I’m feeling determined this year. I am determined not to simply serve myself but to go beyond the footstools of traditional power sources but to evolve beyond the positions of seeker, student, the afflicted and assisted and onto being the model of the change I would like to see globally. Right now, thanks to digitization, there is not only access to information that was previously unavailable, but an opportunity to engage more primary sources and analyze information typically passed down to us. On this blog, hopefully, you will discover some exciting new resources, and decide to get in on the conversation. Therefore, I believe that keeping our eyes on culture, tech, and the environment is key now and for the future.